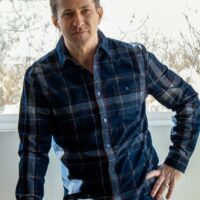 In addition to being a novelist, Rob Samborn is a screenwriter, entrepreneur and avid traveler. He’s been to forty countries, lived in five of them and studied nine languages. As a restless spirit who can’t remember the last time he was bored, Rob is on a quest to explore the intricacies of our world and try his hand at a multitude of crafts; he’s also an accomplished artist and musician, as well as a budding furniture maker. A native New Yorker who lived in Los Angeles for twenty years, he now makes his home in Denver with his wife, daughter and dog.