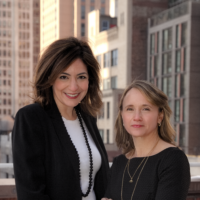 Jenny Judson and Danielle Mahfood, who met in high school, share a mutual love of historical fiction and romance novels. Instead of passing notes in class, Jenny and Danielle would write short excerpts from imaginary novels that featured themselves and their classmates as characters caught up in tales of romance and adventure. Many years later, after cheering for opposite teams at Harvard-Yale games, they came together in New York City to begin writing The Last Season, which is inspired both by the Victorian period and the financial crisis of 2008.